Clipper Round the World Race puts extreme emphasis on safety. After all, we are doing an ocean yacht race and unfortunately people have died in previous races. It’s critical to learn from past incidents to ensure they don’t happen again. Because of this, level 3 training starts in the classroom, covering the topic of Advanced Sea Survival.

Advanced Sea Survival is a course designed to discuss the real possibility of what can happen during the race and what precautions need to take place. This was taught by prior race skipper and training instructor David Hartshorn, who unfortunately had to go through a lot of what was discussed. You can check out this YouTube video to see just how quickly something can happen.

I am pleased with how Clipper addresses the safety topics and I know that they will always continue to look for ways to ensure the safety of the crew and yachts.

The classroom session started with about 40 crew, enough for three fully crewed level 3 boats. We didn’t know who was going to be on our boat for the week. During introductions we were asked to state our name, where we were from and what boat we were on for the race. As we all took our turns speaking, there was a pocket in the room where I was seated that had a disproportionate amount of people on my team! What were the odds? After I said where I was from the man next to me introduced himself and said he was on my team too. Furthermore, I found out he also lived in California and went to the same sailing school that I went to. What are the odds of that?! All five of us on WTC Logistics ended up being assigned to the same training boat together. It’s going to be an awesome week ahead!

Welcome to a Clipper 70

The Clipper 70 made its debut in the 2013/2014 race edition. The vessel is completely different from a Clipper 68. The section forward of the mast is dedicated solely for the sail locker, line storage and forward crash bulkhead. All crew accommodation was moved aft of the galley which is situated just behind the mast. There are still two heads onboard, one just forward of the galley and one just aft, both on the starboard side. The navigation station is located all the way aft, just beneath the dual helm station.

On deck the changes include a centralized cockpit for all line controls, two coffee grinders that can be used independently for the primary winches and mainsheet winch, or together to dedicate the power of 4 crew to hoist the mainsail or grind in a working sheet. The jackstays that you clip onto run uninterrupted fore and aft, making it safer and quicker to move from the helm station to the foredeck. I’m really excited to go sailing on this boat!

It’s better than flying a plane!

After doing countless evolutions in the Solent it was time to sail out into the English Channel. As we left the Solent Forts behind us the wind started to pick up along with the sea state. At this point some of the crew started to feel sea sick, which is natural and will come to pass normally within 24 to 48 hours. As the wind picked up the yacht started to heel over more and more to it’s true racing angle, 30+ degrees of heel. This is what life will be like on board the yacht during the race.

We each cycled through the different roles on deck and then it was my turn to helm the boat. Clipped in, I took the helm for the first time in these conditions. It was one of the most exhilarating moments of my life. To be helming a 70’ yacht healed over at 30+ degrees, going 12kts through the water with only 18kts of wind. It was more exhilarating than the first time I flew a small Cessna plane.  I had the biggest grin on my face, literally from ear to ear.

After sailing out into the channel for a few hours it was time to turn around and sail back towards the Solent. We were in for a treat as that night we would spend on the dock in Cowes on the Isle of Wight, one of the most famous towns in Britain for yacht racing. Cowes Week is at the start of August every year and hosts 1000 boats, 8000 sailors and has been held since 1826. The annual Round the Island race attracts upwards of 1500 yachts each year. The Rolex Fastnet offshore race starts in Cowes and goes out past the Needles on the western tip of the Isle of Wight. Most recently, Sail GP raced off of Cowes in August.

Cowes is also home to the Royal Yacht Squadron, one of the most exclusive yacht clubs in the world. They held a race around the Isle of Wight in 1851, which was won by the schooner America from the New York Yacht Club. This was the start of the America’s Cup, named after the schooner that won that initial race. The New York Yacht Club held onto the trophy until 1983 when the Australian’s won the race with their yacht Australia II. The Auld Mug is the oldest international sporting trophy, and will next be challenged for in Auckland, NZ in 2021. Yacht design has come a long way and the 36th edition of the America’s Cup promises not to disappoint with 75′ foiling mono hulls with no keel. You can check it out here.

We went to the Anchor Inn pub that night for a pint or two. After sharing great stories with fellow crew it was time for bed, however walking out of the pub a few of us heard folk music coming from up the street. We decided to investigate and found ourselves with about 60 locals in a small hole in the wall pub. It was Tuesday, which is Irish night. All the locals show up with their instruments and jam out. It was truly an amazing experience to witness.

Unfortunately, the wind gods decided we would not be flying our asymmetrical spinnaker this week. With light winds we were only able to fly the kite for about 30 minutes before our skipper made the call to lower it down. I am extremely happy that I was able to get some experience flying a spinnaker on my level 2 training.

Every week of training started out the same from a crew dynamic standpoint. You meet other complete strangers from all parts of the World, everyone is quietly assessing everyone else, trying to figure out who these people are and wondering if we will get along. As the days pass and you spend countless hours living and sailing together, you start to know the personalities and skill sets. You know who knows how to sail, who needs help learning how to steer the boat, who is a good cook, who is the joker, who is the know it all, and who the natural leaders are in the group.

Communication is key, and early in the week of training it normally is not as strong. People don’t want to shout commands at other people or there is uncertainty of one individual who hasn’t been on a boat in 4 months since their level 2 training. As the week progresses, the crew become more confident in their sailing and communication skills.

On our last sailing day of level 3, our training skipper Nigel had us do a “tack-a-thon” in which we do tacking evolutions continuously for an extended period of time. The goal of the drill is to reinforce the skill sets needed for each position in the evolution along with adding a sense of urgency that will definitely be felt on the actual race. Our level 3 crew rose to the challenge and acted like a well-oiled machine. Something that would not have happened on day 1. A team has to go through the process of learning about each other before they can become a real race team.

Training skipper Nigel has a reputation as being a “nasty” person. In all honesty he is a very fair man who cares about the safety of his crew and wants to ensure that everyone is learning the safe way to sail. He can come across as cold at times, due to his dry sense of humor and being a man of few words, which is where I think he gets his nickname. At our crew dinner on the last night one of the crew members came up with a group name for us. Since we ended the week on a high, working together as a team, we got the nickname Nasty Nigel’s Marauders. It was a very fitting way to end our level 3 training week!

It was now time for me to leave the Portsmouth area and fly back home. It had been an unbelievable three weeks of training. I met some amazing people that really are preparing for the Race of Your Life. I would be back though in three weeks’ time for my level 4 training. This would be training with my skipper and AQP on our actual yacht, CV23, team WTC Logistics. Can’t wait!!! 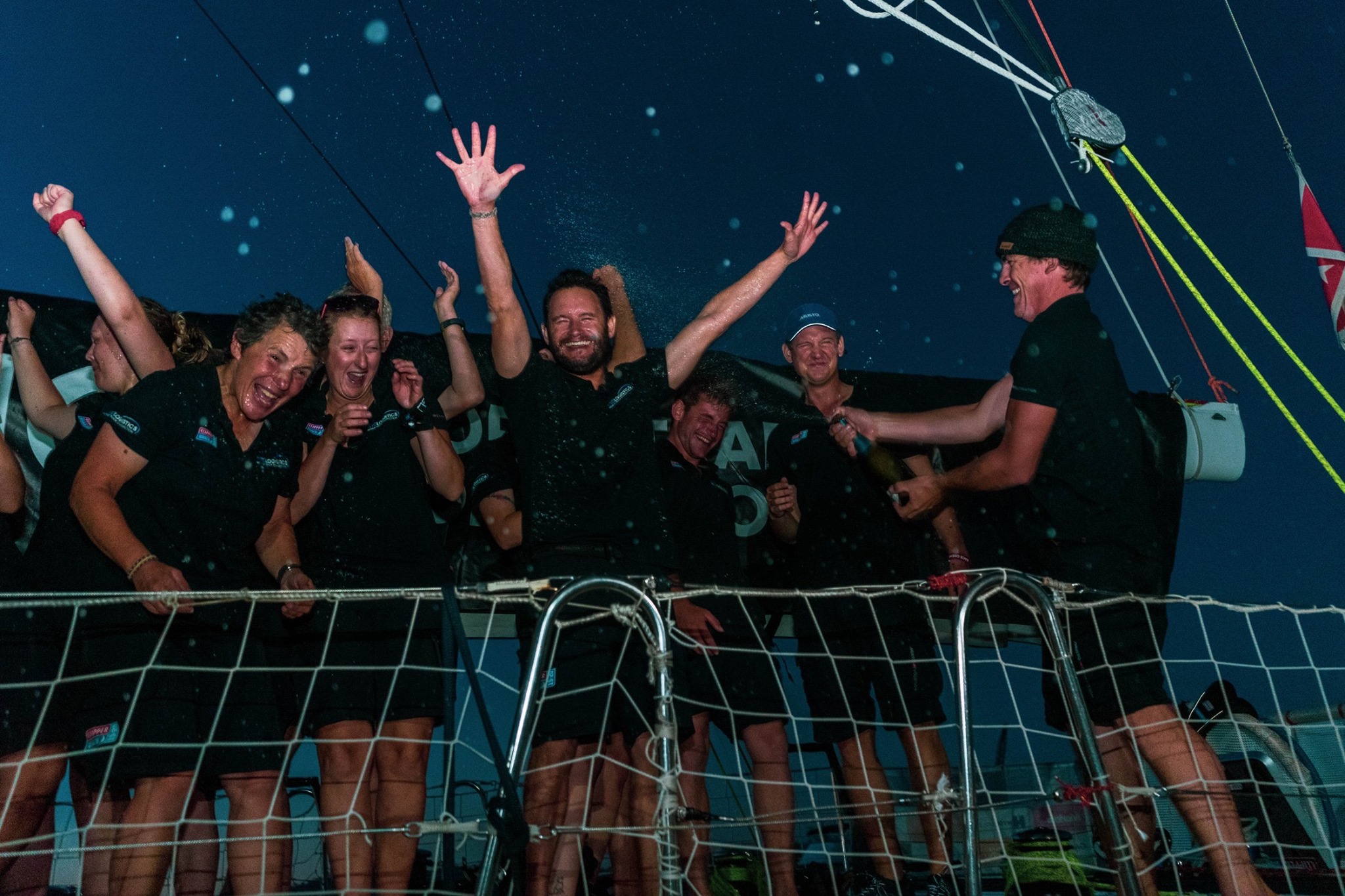